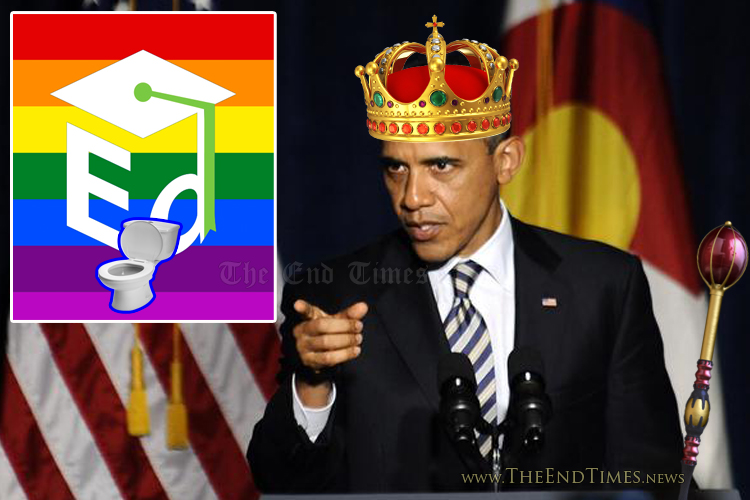 WASHINGTON, DC – American President-turned-Emperor Barack Obama decreed this morning that all American Public schools are to be fully, formally, and officially recognized as the open toilets that we all know they’ve been for quite a while now, and threatened to withhold federal funds from any local school district that does not comply with his decree to allow anyone into any bathroom at any time for any reason or no reason at all.

“We must remain diligent and true to our conviction as Americans that people are free to do whatever they want and that education cannot be advanced under the banner of any specific set of standards rooted in any particular religion or any particular God,” Emperor Obama explained while showing off a new sceptre and crown at a Friday the 13th West Wing press conference held just after his decree was announced to serfs and peasants across the fruited plain. “We have to understand that freedom apart from any particular God or religion ultimately must mean the freedom to do whatever one pleases wherever one pleases whenever one pleases.”

“That obviously includes going to the bathroom wherever one feels led to go.”

“Thus, I have today decreed that all American public schools will from this day forward be recognized as giant open toilets, with students and faculty totally free and at liberty to relieve themselves wherever and in whatever manner they see fit.”

“Will some people complain about this? Sure. For a while. Particularly those on the radical Christian right.”

“But we all know that almost all of those very same loud mouthed, big talking so-called conservative Christians will just keep right on sending their kids to public schools for State-run, anything goes education,” added a confident Emperor Obama in a mocking tone. “So let ’em talk big, make the predictable political noise and pout for a while.”

“We all know that at the end of the day and after the dust settles they won’t actually stop sending their kids to our open public school toilets for a good progressive education.”