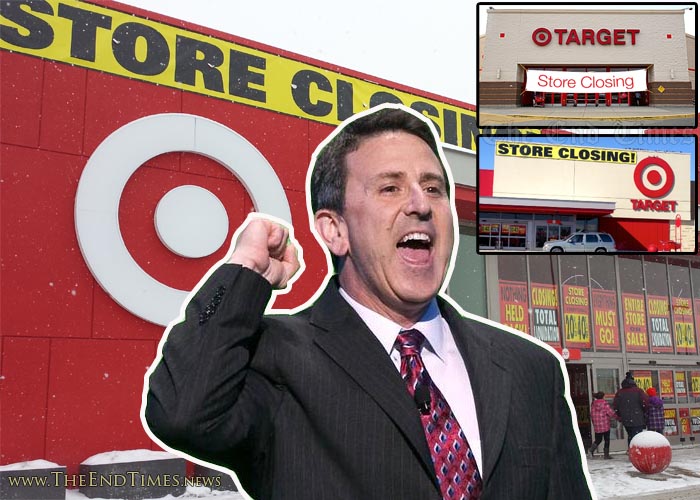 SAN FRANCISCO, CA – With sales sliding and stores closing alongside building protests from groups opposed to Target’s pervert-enabling open bathroom policy, Target CEO Brian Cornell announced at a San Francisco Gay Pride rally that the company is “doubling down on its commitment to the LGBTQRSTD movement” and that “Target Stores, Inc. will not be bullied by a bunch of narrow-minded, simpleton bigots who would dare try to keep transvestites, transsexuals, and certain members of the Kardashian family from sharing a bathroom experience with their little girls and boys.”

“And if they don’t like the thought of RuPaul or the Rocky Horror Picture Show guy strolling into the bathroom with their precious little Jane or Johnny, then these intolerant religious wackjobs can take their business elsewhere,” ranted Cornell to the thunderous applause of innumerable drag queens, Madonna fans, and NAMBLA advocates gathered together in front of a rainbow flag adorned Target storefront. “The time has come to make a stand! The time has come to break down the walls that have kept innocent children and good-hearted sexual deviants apart!”

Target’s rabidly pro-LGBTQRSTD stance has only intensified since it announced the open bathroom policy that inspired a massive protest and boycott movement under the #BoycottTarget banner. Since the bathroom policy went into effect, Target has launched its “TransJenner” line of clothing for men pretending to be women, with Bruce  Jenner serving as product spokesman.

The company also rolled out a “TransToddler” line of clothes for the children of profoundly confused parents. The TransToddler line is also marketed under the TransJenner brand.

Despite all of the controversy inspired by these moves, the company has found allies in its fight for the rights of deviants and perverts to more freely stalk children in bathrooms.

“We are very thankful for the support of a legendary, globally renowned pervert and predator like former President Clinton,” added Cornell. “Who better to remind us all that here in America nothing’s sacred and anything goes?”

“So get with the program, America. The time of gender distinctions has passed. The time of sexual freedom has come. And we will simply not accept, much less accommodate, any view to the contrary.”

“If there’s one thing we can’t stand at Target, it’s intolerance!”