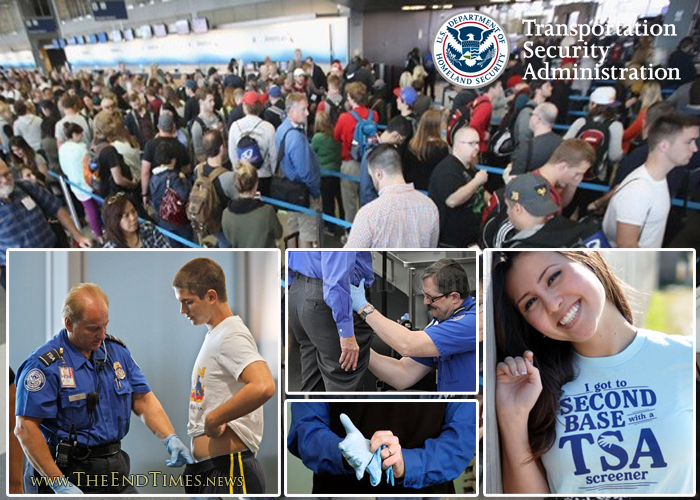 CHICAGO, IL – With lines of desperate, fatigued travelers swelling to unbearable lengths at airports all across “the land of the free”, the Transportation Security Administration (TSA) is being called upon to at least speed up the process by which it gropes and molests masses of Americans in the name of protecting their freedom and dignity.

“I understand that as a proud, freedom-loving American who wants to protect myself and my beloved homeland from al-Qaeda, ISIS and other CIA-backed, taxpayer-funded terrorists, it’s my solemn duty to bend over on governmental command and allow an otherwise unemployable agent of the TSA to look for Bin Laden’s cousin in my underwear,” noted 78-year old retired businessman Carl Jenkins while waiting in line to travel in America and staring into one of the many TSA-run surveillance cameras watching him while smiling nervously and pointing to his American flag lapel pin. “But do they really have to take their time and enjoy it so much?”

“Wouldn’t a quick, efficient 20- or 30-second grope-fest be enough to do the trick?”

“Wouldn’t that be enough to secure my freedom, safety and dignity as an American?”

Jenkins is not alone in his assessment, and the longer the lines grow, the more impatient many Americans are becoming with the long wait to bend over and prove themselves to be compliant cattle content to be utterly dominated by Big Brother.

At Chicago’s O’Hare International Airport, routinely one of the busiest in the world, the average line to board departing flights stretched on and on over Memorial Day weekend with people waiting up to six hours for the privilege of literally bending over and submitting to government-sanctioned fondling by the ever loving, occasionally gloved hands of the TSA.

“First, they promise you peace, security and safety if only you hand over your privacy, freedom, and liberty to the State.”

“Then, once you accept that arrangement, it’s just a matter of time before they tell you to bend over and do as you’re told.”