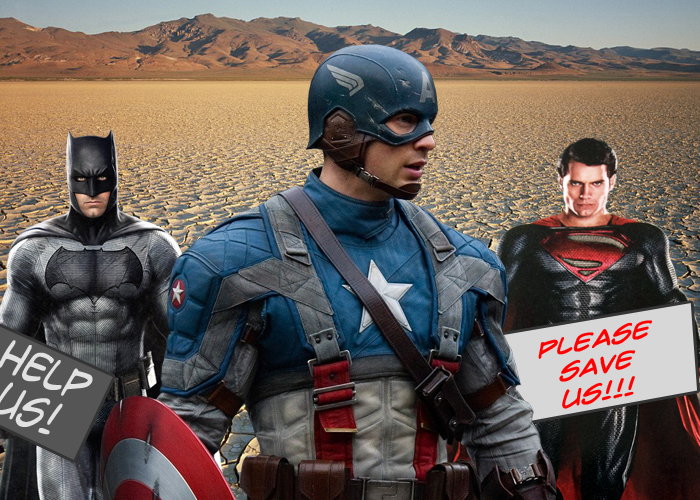 NEW YORK, NY – With the steaming pile of cinematic carnage that is DC’s Dawn of Justice still smoldering, and once premier superhero brands like Batman and Superman left buried in the post-Justice rubble, Marvel’s much beloved Captain America has taken it upon himself to lead a daring mission to save the betrayed, beleaguered, and badly beaten Caped Crusader and Man of Steel from the DC Universe in which they’ve been left to die.

“It’s hard to even look at these men after what’s been done to them,” noted Captain America soberly while preparing to brief his fellow box-office dominating Avengers on the mission at hand. “I mean, did you actually see Dawn of Justice?”

In the wake of DC’s Justice debacle, critics are somberly noting that even third- and fourth-tier Marvel heroes are being successfully employed as centerpieces for films far exceeding the quality of anything DC seems able to produce using even their formerly ‘A’-List heroes.

“Look, when you’re Superman or Batman and you can’t even compete with an Ant-Man movie, something’s gone terribly, terribly wrong,” added a focused, caring Cap while suiting up in the very uniform he wore earlier this year as he effortlessly trounced the now legendarily awful Batman v Superman at the box-office. “I just can’t go on looking the other way and pretending it’ll all work itself out. These guys need help – serious help, and pronto!”

“How much longer can they hold on? Can they even survive another DC Universe film?”

“And I’m not about to let them go out that way,” proclaimed the good Captain while gazing off into the horizon in yet another demonstration of perfectly timed dramatic effect. “I just can’t continue to sit idly by and enjoy watching them get spanked and humiliated again and again and again this way, even if their perpetual spanking and humiliation greatly benefits me and my friends and makes it all that much more plain to a watching world how utterly dominant and superior Marvel is to DC.”

“With those important and undeniable facts duly noted, we have to save them. We have to do the right thing.”

“If we want them to live to at least have the hope of one day competing at the box-office with relatively unknown Marvel heroes like the Black Panther and Doctor Strange, we have to act. We have to get them out of there before another DC superhero flick goes into production.”