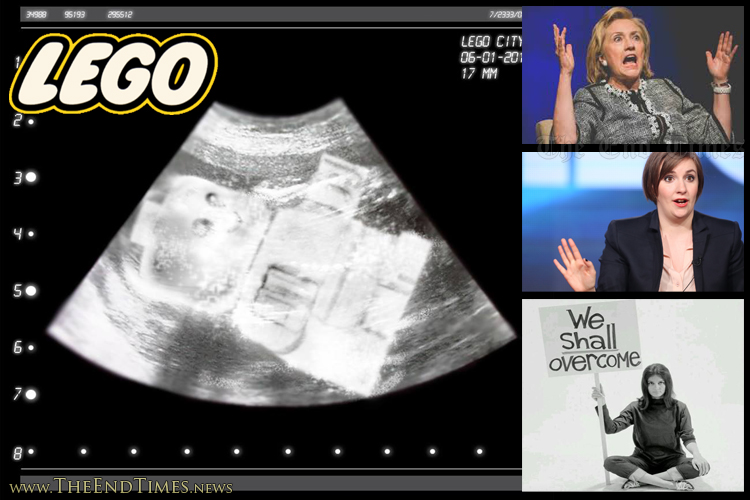 HOLLYWOOD, CA – Feminist icons and Planned Parenthood advocates across the nation are expressing outrage and horror over a new Lego campaign featuring a mock Lego ultrasound depicting a Lego baby inside a Lego mother while visiting a Lego hospital.

“What an ugly, insensitive, mean-spirited and disgusting marketing ploy! Shame on you, Legos!” shouted an angrier than usual Hillary Clinton, wife of the perpetually woman-abusing Bill Clinton, to the cheers and howls of a couple dozen wild-eyed child murder advocates gathered in front of a Hollywood Planned Parenthood clinic to protest Legos and kill babies. “To show what appears to be an actual Lego child inside of its Lego mother in what is presented as a Lego ultrasound at a Lego hospital is unconscionable!”

“How can this be happening in America!” shrieked a dried up old Gloria Steinem while waving around a poster board with ‘We Shall Overcome The Hate And Persecution Of Legos’ scribbled across the front. “More importantly, how much longer will we allow this to happen in America!”

Lena Dunham, modern torch-bearer for the freedom to murder babies movement and contributor to various pop culture trash television shows added, “Yeah, how much longer will we sit by and let the tyranny of Lego ultrasounds stand? The time has come to kill this ad campaign!”

After the three feminist icons vented their rage at Legodom, they led the invigorated crowd of demonic child murder advocates on a long march through Hollywood chanting, “Kill the Lego babies!”