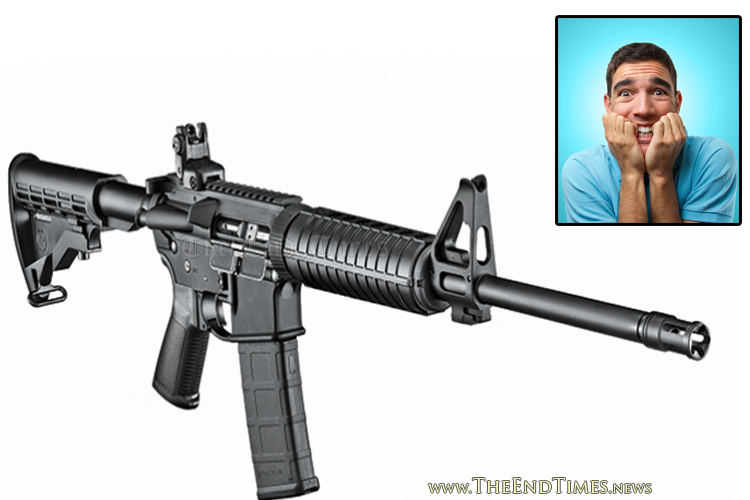 NEW YORK, NY – An apparently transitioning columnist for the New York Daily News was “so severely traumatized and agitated” by his recent experience of firing an AR-15 rifle at a shooting range that the increasingly girly man is claiming to have been “physically and emotionally ravaged” to the point of requiring treatment for both PTSD and PMS by a cadre of personal physicians, psychologists, therapists and fellow journalists.

In his recent Daily News article entitled “What is it like to fire an AR-15? It’s horrifying, menacing and very very loud”, Gersh Kuntzman went into great detail chronicling the bone-chilling terror that he felt upon visiting a local gun shop to learn more about AR-15 rifles so that he could more effectively demonize them in the aftermath of a homosexual Muslim going on a shooting rampage wounding over 100 unarmed victims at a gay bar in Orlando last week.

“I just wanted to know more about this demonic tool of mass slaughter that so many profoundly confused, independent-minded Americans seem to love so much,” explained Kuntzman while fanning himself with one hand and popping a handful of Midol tabs with the other. “What I discovered upon visiting the Double Tap Shooting Range and Gun Shop was even more terrifying than what I’d expected heading into my visit, which, as you can probably imagine, is saying a lot.”

“When I tested out the gun for myself, it felt like a bazooka!” squealed Kuntzman. “No, ten bazookas all in one!”

“It felt like a shoulder-launched intercontinental ballistic missile or something going off right up against my innocent, dainty little shoulder,” exclaimed a hysterical (in every sense) Kuntzman while describing the “overpowering, shoulder-bruising kick” he experienced when firing the relatively mild .223 round routinely shot by supervised children across America without causing them any discomfort whatsoever. “I felt like I’d just fired a howitzer – no, TEN howitzers all at once – all from my very own shoulder!”

“The vicious kick from firing an AR-15 left such a huge, ugly and uncomfortable bruise that can’t I even sling a purse over my shoulder without bursting into tears,” Kuntzman rambled. “The whole experience has left me an emotional wreck.”

“Even more so than usual.”