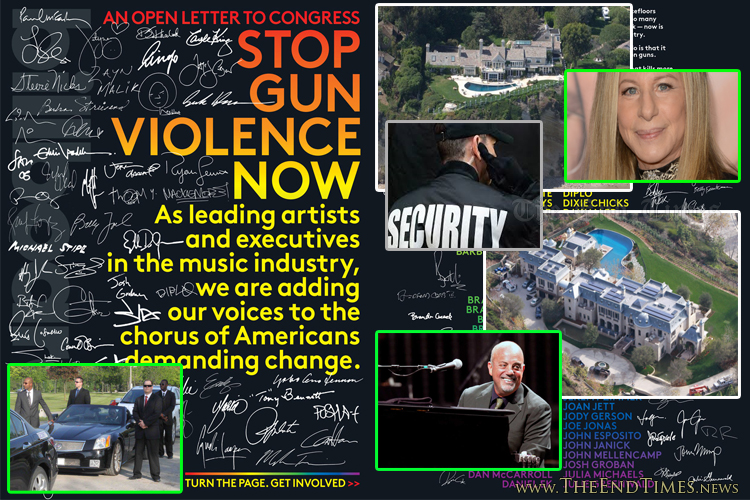 HOLLYWOOD, CA – In what it calls “An Open Plea To Congress To Disarm America’s Peasants”, Billboard Magazine has given over its cover to a gang of multimillionaire, mansion-dwelling, armed-guard-employing “artists” who, in the aftermath of an enraged homosexual Muslim shooting up a gay bar in Orlando, hope to seize the opportunity to forcibly disarm the non-elite, everyday Americans who made them rich in the first place.

The cover includes comically hypocritical elitist lines too stupid to reprint here, along with the signatures of scores of top tier “artists” including Barbra Streisand and Billy Joel, the owners of gigantic mansions secured by vast security networks and small armies of very well armed guards.

“It’s time to stop the violence caused by people lesser than us being allowed to have guns,” bellowed Babs from behind a slightly lowered bulletproof window toward the back of her 30′ limousine as she rolled from her 23,000 square foot mega-mansion to visit one of her three gigantic other homes across town. “How can we be so uncaring as to let these poor, stupid, brainless little creatures have the means by which they might defend their little hovel-like homes and families from the increasingly lawless thug culture we’re working so hard to enable and promote through our perversion of the arts?!”

“The only place for such rank, culture rotting behavior is in my albums, art, and videos, which I can then market and sell to acquire massive piles of personal wealth.”

“How else am I supposed to afford all of these mansions and heavily armed professional bodyguards?”