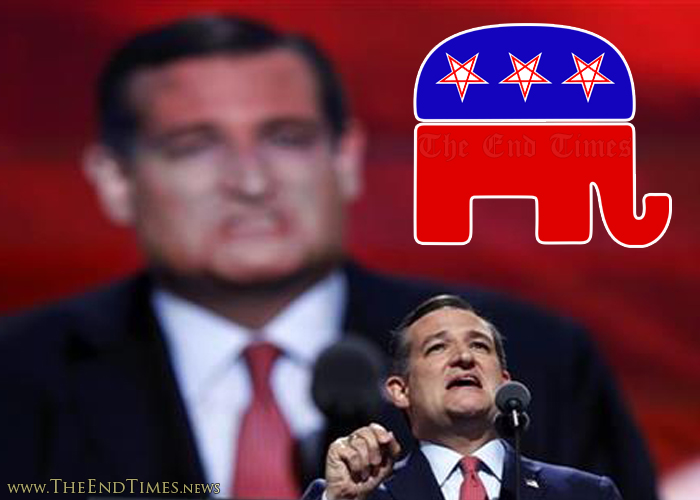 CLEVELAND, OH – Much to the shock, horror, and dismay of thousands of Grand Old Party cultists gathered in Cleveland to formally crown their political savior of this presidential cycle, Senator Ted Cruz has broken the blood oath that he took on the very same stage just months ago, in which he pledged to endorse and support the GOP nominee, no matter who he, she, or it turned out to be.

As Cruz’s prime-time speech went on and on and on during last night’s session of the Republican Party Convention, tension grew and tempers flared. By the time it became obvious that he was not going to endorse Donald Trump for President, boos began to build and mobs of angry Republican cultists began to chant “Honor the oath! Honor the oath!” while holding up large signs featuring the GOP’s famous elephant mascot decked out with three blood red pentagrams and little devil horns popping out from its forehead.

“You must honor THE OATH!” shrieked one apoplectic Trump supporter from the convention floor. “You must support the Republican nominee no matter who or what it is, even if it’s the devil himself!”

“How else can you possibly claim to be a moral person?”

But not all were displeased with Cruz’s refusal to endorse a proudly unrepentant, biblically illiterate, adultery promoting, routinely wife-upgrading man for President.

“At the end of the day, he just couldn’t do it,” confided a well placed aide from the Cruz camp on condition of anonymity. “Ultimately, Ted realized that while he may indeed have on multiple occasions taken a public oath to support the GOP nominee, sometimes we have to admit we were wrong and not follow through on really, really, really bad promises. We can’t let our past pledge to do a stupid thing constrain us to do that stupid thing after we realize it’s a stupid thing.”

“Once we realize that the Kool-Aid is poisoned, we don’t have to honor any previous commitment that we may have made to drink it.”