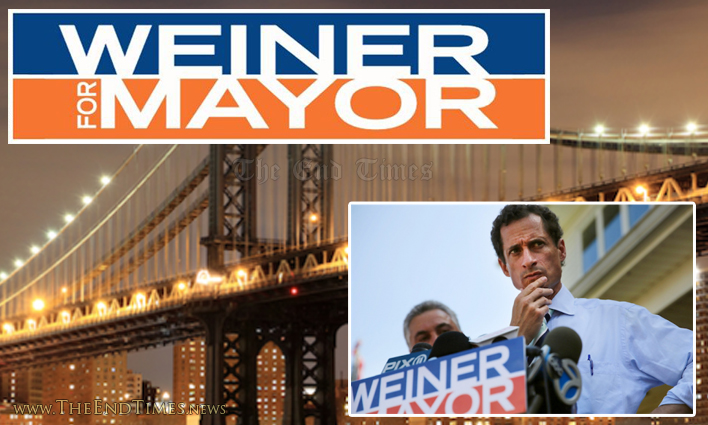 NEW YORK, NY – With disgraced former Congressman Anthony Weiner’s governmental aspirations all but obliterated following a third sexting scandal, and with his wife, Hillary Clinton top aide Huma Abedin-Weiner, publically announcing that she and Mr. Weiner are separating, experts and observers from across the political spectrum are proclaiming the political career of Anthony Weiner, also known to Twitter fans as “Carlos Danger”, as finally and completely dead.

But like a hockey mask wearing zombie in a bad horror flick, the political aspirations of Carlos Danger seemingly cannot be fully finished off and buried. Just when the world thinks it’s seen the last of Weiner, he finds a new line to pitch and a new office to seek.

This time around, Mr. Weiner is apparently planning to run for Mayor of what his few remaining confidants describe as “a small group of homeless people gathered under a bridge in Manhattan”.

“Why not?” explained one of Weiner’s three remaining friends on condition of anonymity. “He’s seen how people like the Clintons just keep right on doing their thing – raping, pillaging, and shamelessly profiteering along the way – and he sees no reason to believe that he cannot be Mayor and, one day, perhaps even President.”

While Mr. Weiner’s first sexting-scandal-derailed mayoral run was aimed at the lofty position of Mayor of New York City, this time around he’s seeking to lead a much more humble and much less informed community.

“He’s trying to be realistic and build from the ground up, literally,” explained another of his three remaining friends, also on condition of anonymity. “Sometimes you have to start small and work your way up from the very, very, very bottom.”

“And besides, these people don’t have access to the Internet or social media, so they haven’t really been introduced to Carlos Danger, which really is an essential part of Weiner’s campaign strategy.”

“As long as they have zero access to television, radio, and the Internet; and as long as they can’t afford to buy a newspaper, there’s at least a chance they might vote for him.”