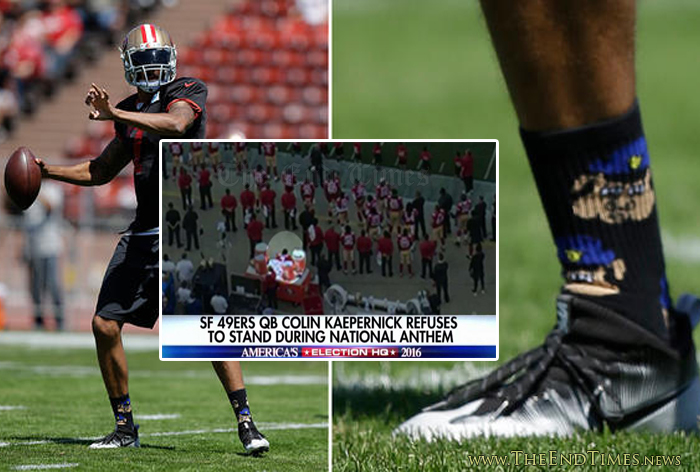 SAN FRANCISCO, CA – Beleaguered San Francisco 49ers quarterback Colin Kaepernick’s controversial socks have been formally charged with treason, according to a statement released this afternoon by the US Department of Justice.

The socks, depicting cartoon pigs in police hats and worn by Kaepernick during a recent 49ers practice, if convicted, will face death by either firing squad or Zippo, whichever is deemed to be more humiliating to the culture-rocking footwear in question.

With the nation transfixed by socks worn by a mediocre quarterback on a bad NFL team during an uneventful practice while millions of babies continue to be slaughtered via abortion, “gay marriage” sweeps the culture, and Hillary Clinton continues to claw her way to the White House, it has become clear that Americans are among the most profoundly confused and easily distracted people in all of God’s creation.

“It’s time for this long national tragedy to end,” explained one Bay-area sportscaster who loves to talk about things like politics, law, justice, and truth as though he has a clue about any of them when every other word that comes out of his mouth confirms that he does not. “We have to make an example here. We have to take a stand! We have to do it for the troops, police, children and kittens all across America!”