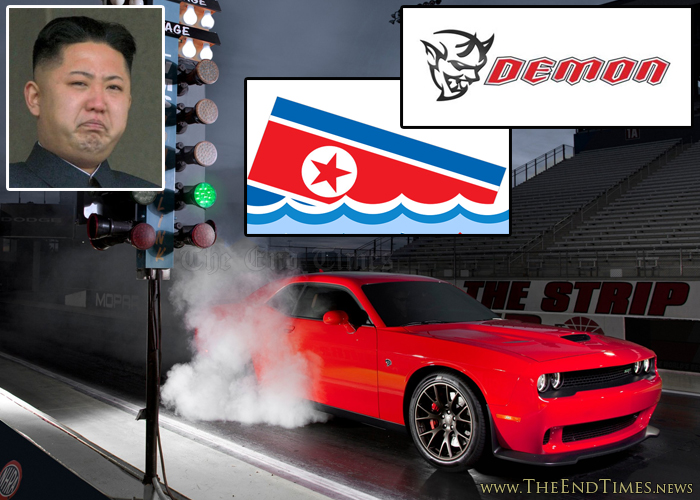 DETROIT, MI – Dodge has announced that a forthcoming variant of its supercool retro ride, the Dodge Challenger, will boast enough horsepower and torque to “literally tow North Korea into the sea”.

“It’s like an anti-Prius,” explained one proud, masculine Dodge executive. “We just felt like, after decades of increasingly lame, sterile, effeminate little bubble cars permeating the American countryside, it was time to move the market in a much louder, more powerful, and more heterosexual direction.”

The new Challenger, dubbed The Demon, will substantially outgun and outperform the already ludicrous, ozone-obliterating Hellcat, the current king of the Challenger lineup.

The Dodge Challenger Hellcat, available since 2015 to environment-torching sports car enthusiasts everywhere, sports 707 horsepower and is able to hit 60 miles an hour from a standstill in the low 3-second range on its way to a top speed of 199 mph. The Hellcat’s quarter mile time has been certified by NHRA at 11.2 seconds on street tires.

The Demon, of course, will be even quicker and more powerful.

In anticipation of The Demon’s release after stumbling across Dodge’s press release online, North Korea has placed its military on high alert and is warning citizens to be on the lookout for “suspicious looking tow cables or ropes tied to any major national monuments”.