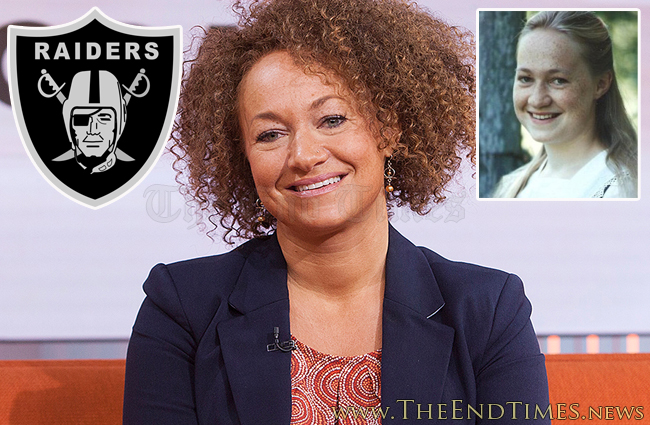 OAKLAND, CA – According to numerous reports, the Oakland Raiders have interviewed famed pretend black woman Rachel Dolezal to fill the team’s head coach position as the organization goes through the process of accommodating the idiotically racist/sexist Rooney Rule before actually hiring Jon Gruden, a much respected and highly coveted Super Bowl winning coach who happens to be a white man.

The Rooney Rule, a comically insulting, productivity-wrecking attempt at corporate virtue signaling, was adopted by the NFL in 2003 and requires teams to interview minority candidates for head coaching and senior football operation jobs when those positions are open.

“Look, if Gruden was just black or a woman or, better yet, a black woman lesbian, the Raiders could just make the hire instantly,” explained one league insider on condition of anonymity as to avoid being publicly labelled a racist/sexist/homophobe for daring to speak in an intelligent, coherent manner on the subject. “But as it stands now, heterosexual white men simply can’t be hired for these positions without a team at least pretending to be interested in a non-heterosexual white man candidate first.”

By reaching out to Dolezal for an interview before formally hiring Gruden, who has been arguably the most coveted available coach on the market for years now, the Raiders have highlighted the absurdity of race- and sex-based quotas in an age when anyone can “identify” as any race or gender that they like at any particular moment.

“When Bruce Jenner can identify as a woman and ESPN responds by showering him with awards for courage, how can there even be such a thing as a minority anymore in the objective sense?” asked Dr. John Q. Obvious in an opinion piece published earlier this week. “If Bruce Jenner is a woman just because he identifies as a woman and Rachel Dolezal is black simply because she identifies as black, then maybe the Raiders should just ask Gruden to identify as a black woman lesbian for however long it takes to conduct an interview.”

“What’s the NFL going to do? Insist upon objective standards for defining gender and race apart from the feelings of a person who identifies as whatever gender or race they like? I think we all know that’s not about to happen.”

“When you stop to actually think about it in this context, Jon Gruden really does have an incredible opportunity to become the first black lesbian head coach in NFL history.”