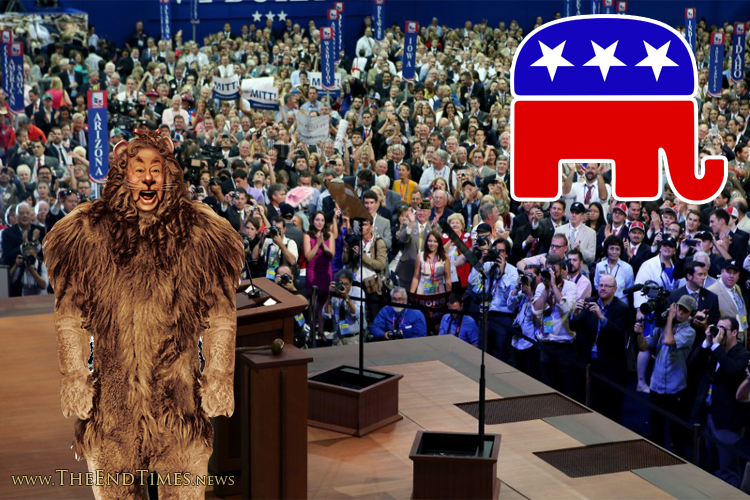 WASHINGTON, DC – The Republican National Committee (RNC)has announced the formal coronation of The Cowardly Lion as the new official mascot of the Republican Party. This comes on the heels of a six month process by which registered Republicans were encouraged to cast ballots and choose a new party mascot that would “better reflect the values and principles of the Republican Party”.

While the GOP had provided ballots with various serious, solid, fearsome and generally impressive options, voters chose instead to overwhelmingly create their own write-in slot, where The Cowardly Lion was penciled in by just over 85% of respondents.

Initially, GOP officials sought to discount or bury the results of a selection process that had clearly gotten out of their control, but once news broke of the nearly three million mailed in ballots cast for The Cowardly Lion, Party leadership decided to own the results and spin them as best they could.

“We couldn’t be more pleased than to have found such a soft, fuzzy, kind and nonthreatening representative of the complete cowardice and lack of backbone that our great party has come to symbolize,” gushed RNC Chairman Reince Priebus via press release. “Our obvious lack of desire to even slow the rapid growth of Big Government power and control over every aspect of life in America while posing, pretending, and talking tough about how we’re for ‘smaller government’ really does make the roaring, but ultimately quite cowardly and pathetic, lion the perfect symbol for the Republican Party.”

As for his part, The Cowardly Lion was quite happy and more than a little surprised to have found a group willing to employ him in any meaningful way.

“I couldn’t be more proud and relieved!” howled Mr. Lion while cowering behind a podium during his acceptance speech. “To have finally found a place where I can pretend to be tough while caving in every meaningful way at every meaningful opportunity, all while being paid handsomely through the contributions of others, well…it’s more than I could have ever even dreamt of!”

“Thank you, Republican Party,” Mr. Lion added while breaking down into tears (again). “I promise to represent you well!”