The self-indicting outrage of scores of professing Christian parents were vented as usual at this week’s School Board meeting and in various letters to the editor, none of which were followed by the parents in question actually removing their children from the cesspool of satanic worldview instruction that is State-run children’s education in Mayberry.

“I just can’t believe it!” cried Jenny Hargrove, mother of three young students in the State-run Mayberry K-12 school system. “My little Johnny, Jillian, and Jeremy are being taught all sorts of things that go directly against my Christian values!”

When Mrs. Hargrove was reminded again, as happens at least once per School Board meeting, that public schools are based on the satanic fiction of neutrality and that the biblical command to center children’s education on the nature of God as revealed in His Word is opposed in every meaningful way with the model of education advocated by the serpent in Genesis 3 and faithfully adopted by State-run schools, including those in the idyllic rural All-American town of Mayberry, she shrugged, rolled her eyes, and sat down quietly, as always.

“Well, somebody ought to do something about this,” the mother of three muttered in frustration while making no plans whatsoever to remove her children from Mayberry public schools. 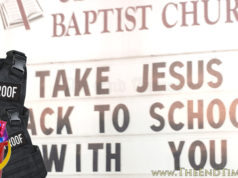