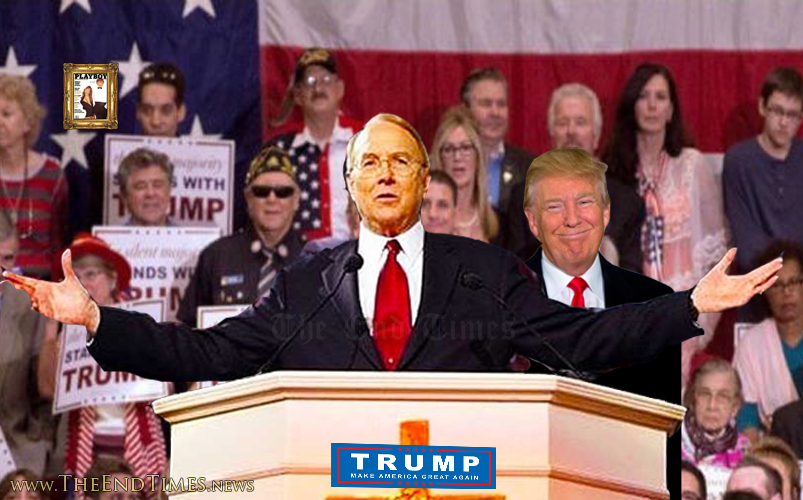 NEW YORK, NY – American evangelical icon James Dobson’s recent announcement that Donald Trump has “accepted Jesus” is being met with hoots and howls of relief from millions of professing Christians desperately seeking any tiny little shred of cover for openly supporting one of the most proud, unrepentant, and boldly anti-Christian men to ever seek the presidency.

Notably absent from Dobson’s announcement of The Donald’s conversion was any direct statement along those lines from Trump himself, who merely stood behind Dobson smiling and giving the occasional thumbs up while Dobson spoke to an assembled mass of evangelical Republicans gathered to do whatever it takes to prevent a registered Democrat from becoming President.

“I can’t tell you exactly when Donald accepted Jesus, but it was pretty recently, so he’s just a sweet little baby Christian and we need to cut him some slack,” explained Dobson while Trump nodded and winked to the crowd. “He doesn’t really know all the trick words and American evangelical lingo yet, so we have to give him some time before we can expect him to exhibit even the most basic, elementary evidence of true supernatural conversion as recorded in Scripture.”

“Just because back in Bible days true salvation always produced certain things, some of them immediate, like repentance, doesn’t mean that we need to expect anything like that from Donald right now or anytime soon,” Dobson added. “It could take a very long time for anything like biblical repentance and actual submission to Christ as Lord in practice to happen in any significant way.”

“But we can’t let little things like that stop us from voting for our dear baby brother Donald in this November’s election.”

Dobson’s iconic status notwithstanding, not all American Christians are buying what he is selling.

“Look, I hope and pray that Mr. Trump has indeed repented and submitted to Christ as King by the grace of God,” explained Josh Childress, an elder at Grace Reformed Fellowship near Gettysburg. “I really do. I pray for the conversion of Mr. Trump, Hillary Clinton, and Barack Obama daily, and I have no illusions about me being any better in and of myself than anyone else, including any Clinton, Obama or Trump.”

“But at some point don’t we as Christians have to actually look to Scripture and test all things in light of the Word of God, including these claims of Trump “accepting Jesus”, as well as what God has clearly told us to require in a leader?”

“I mean, If Mr. Trump has actually been convicted of his sin and has finally, really and truly repented of his sin in submission to Christ as Lord, then shouldn’t he be offering up that testimony himself instead of having James Dobson do it for him at a political rally?”

“This ‘baby Christian’ line in lieu of an actual testimony of conviction and repentance from the man being portrayed as having ‘accepted Jesus’ reeks of politics trumping biblical Christianity, which, I’m sad to say, has pretty much become the norm with the likes of Dobson,” added Childress. “Based on the so-called conversion being described by Dobson, it sounds like Trump is less qualified for the White House than he is for Awana or Vacation Bible School.”

“Isn’t it funny how things like the ‘baby Christian’ defense are always eagerly used by evangelical Republicans in defense of Republican candidates, but not so much for ‘Christians’ like Bill and Hillary Clinton?”

“Aren’t these the same people that keep steering us toward the likes of Mitt Romney, George Bush, and John McCain?”

“In light of the ‘Christian leadership’ we’ve had in politics for generations now, it seems like maybe Dobson might have more to repent of than Trump.”