Home Word of Faith Benny Hinn Convinced That Sucking Spiritual Power From The Bones Of The... 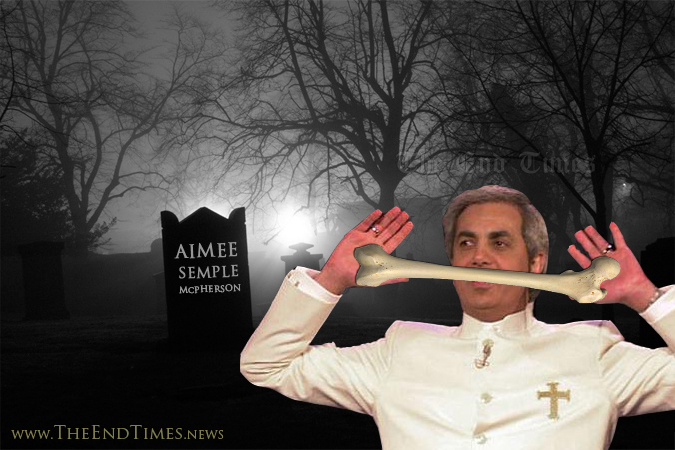 LOS ANGELES, CA – Popular living caricature of a televangelist Benny Hinn recently defended the practice of grave sucking as “totally biblical” during a televised TBN event broadcast live from the grave of Aimee Semple-McPherson, where Hinn claims to have received “a terrific anointing of God’s power”.

The increasingly popular and profoundly creepy approach to spiritual growth, alternatively known as “mantle grabbing”, “grave soaking” or “grave sucking”, centers on the dead bodies of deceased church leaders whose decomposing corpses are presumed to somehow have residual supernatural power lingering within them just waiting to be sucked out.

“Many believers seeking to leap ahead on their path to becoming supernaturally awesome like me try to kick their spiritual growth into high gear by leaching Holy Ghost power from the anointed dead,” clarified Hinn in a totally serious tone while holding up what appeared to be a human femur bone. “They do this by hugging tombstones or laying directly on graves in order to get close to the lifeless bodies of supercharged saints lying beneath them.”

“Some are so determined to get ahead spiritually that they will do whatever it takes to get as close to the deceased as possible, removing all barriers and distance between them and the supernatural power they’re trying to suck from the anointed dead,” added Hinn matter-of-factly while raising the large bone high. “It all seems fairly obvious, I know, but you’d be surprised how many people find it a little odd and off-putting. Unorthodox, even.”

“Sure, it can take some time to get into a really good grave sucking groove, but once you’re there it quickly becomes as natural and biblically sound as anything else you might see me doing on TBN.”