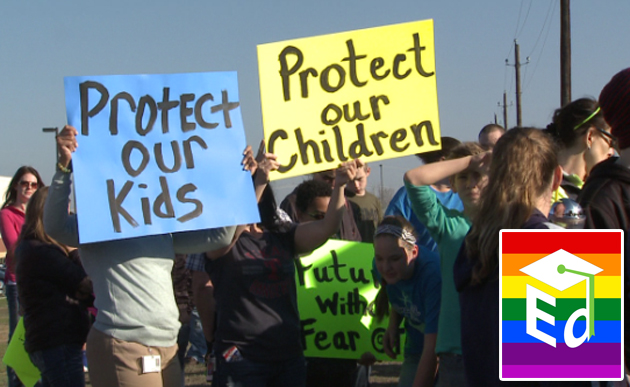 NEWTON, KS – Raging hordes of periodically and selectively horrified parents of public school children are taking to the streets this week all over Middle America, this time in opposition to the LGBTQ-supportive “Day of Silence” that will be observed on Friday in State-run schools across the land.

The angry mobs protesting on street corners, in school board meetings, on Facebook threads, and in Twitter feeds often describe themselves as “shocked”, “outraged”, and “horrified” regarding what their children are being taught in their local public schools. Based on analysis of tens of thousands of picket signs and Facebook/Twitter posts made in the last few days, they are also demanding that their children “be protected” from what is going on in public schools.

Yet, curiously, none of those doing the picketing or posting seem to be interested in actually protecting their children themselves by removing them from the overtly anti-Christian indoctrination system in question.

“We just want to let our kids and our kids’ State-certified teachers know that we want our children protected from the vile filth that’s routinely being peddled in public schools these days,” said Herbert Wimpling, a Newton resident and father of two children currently attending a middle school where the LGBTQ Day of Silence will be observed. “It just seems to get worse and worse with each passing year, and we want it to stop. My kids have been in the system for like seven or eight years now and each year they are being exposed to more and more garbage that goes directly against my Christian values. It’s shocking and horrifying! And it’s been shocking and horrifying for many years now!”

“Somebody oughta do something!”