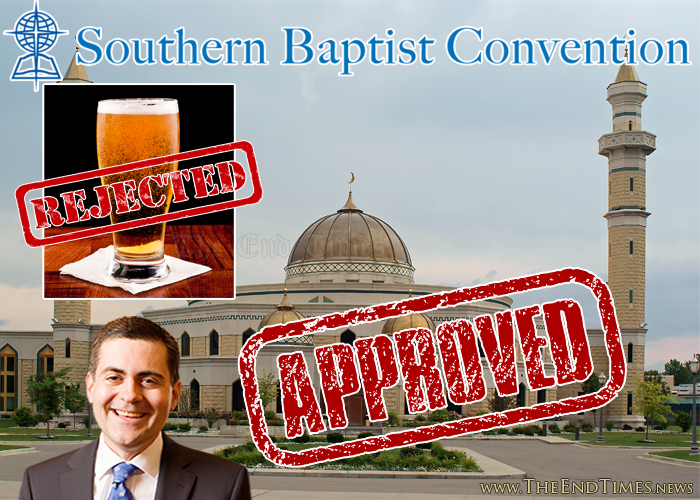 NASHVILLE, TN – After agreeing earlier this year to formally surrender and admit defeat in the culture war while simultaneously supporting a new “Mosques Across America” initiative and refusing to call abortion “murder”, the Southern Baptist Convention (SBC), hoping to offset its perceived indifference to cultural carnage being wrought upon America through the open worship of false gods and open practice of child sacrifice, today issued a sternly worded reiteration of its “rock solid” anti-beer position.

“Look, there are a lot of things we can and should tolerate as good Americans who happen to claim Christianity in some weak, watery, vague and unoffensive way,” noted Dr. Russell Moore, who enthusiastically supports the “right” of Muslims and Satanists to build mosques and temples in America while steadfastly refusing to call abortion murder. “Like mosques being built and openly operating in America, for example. Or witches’ covens. Or satanic temples. Or whatever…you get the picture.”

“And we definitely can’t go around calling abortion murder,” added the ever-smiling Moore. “That would just come across as mean, and we can’t have that!”

“But where we do have to draw the line as babies are being not-murdered by the thousands every day and Satanists are building temples and Muslims are building mosques here all across the land of the free – where we absolutely must hold the line is on the critical life- and culture-defining topic of beer.”

“Yes, my friends, beer is one thing we can and should speak freely, openly, and passionately against at every opportunity while the culture comes crashing down around our squeaky clean little Southern Baptist ears – ears that should never even hear the word ‘beer’ without shuddering in fear and disgust that such a vile thing is still legally sold and consumed here in America.”